CTI Named to the 2018 Inc. 5000 List of the Fastest-Growing Private Companies in America for the Sixth Time 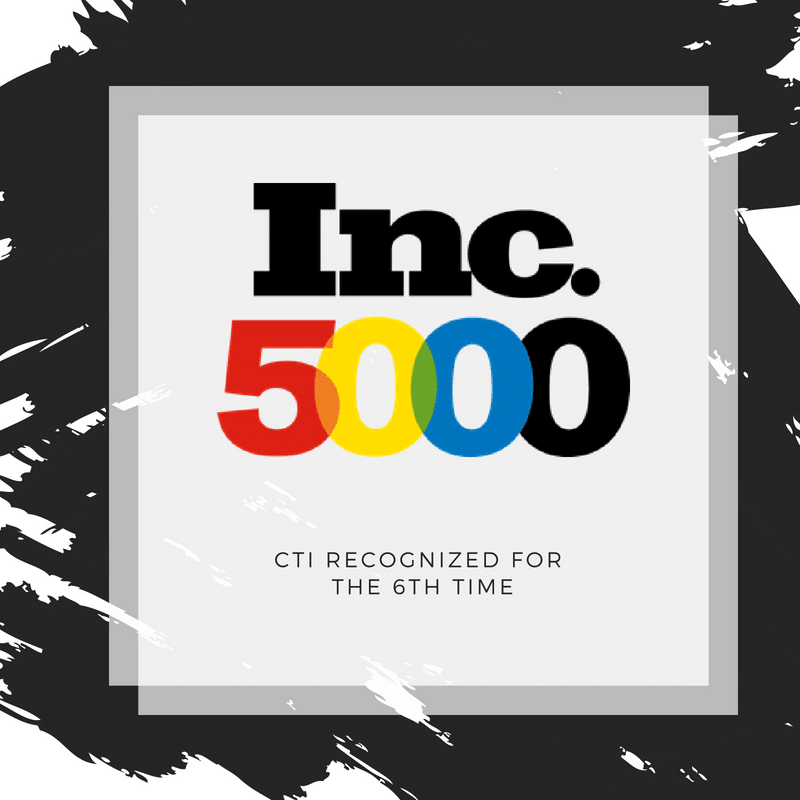 CTI Named to the 2018 Inc. 5000 List of the Fastest-Growing Private Companies in America for the Sixth Time

CTI Recognized on the Inc. 5000 list with Three-Year Sales Growth of 67%

Inc.magazine recognized CTI on its 36th annual Inc. 5000, the most prestigious ranking of the nation’s fastest-growing private companies. This is CTI’s sixth time on the Inc. 5000. The list represents a unique look at the most successful companies within the American economy’s most dynamic segment— its independent small and midsized businesses. Companies such as Microsoft, Dell, Domino’s Pizza, Pandora, Timberland, LinkedIn, Yelp, Zillow, and many other well-known names gained their first national exposure as honorees of the Inc. 5000.

“This award recognizes the dedication and hard work of the CTI team in transforming leaders, teams and organizations,” said CTI CEO Mo Kasti. “We are grateful for the trust our client-partners have put in us to help them every day in saving lives.”

According to James Ledbetter, Editor in Chief of Inc. Media, “companies that made the list, on average, have grown sixfold since 2014 over a stretch when the economy grew around 11 percent, that’s a result most businesses can only dream of.”

Complete results of the Inc. 5000, including company profiles and an interactive database that can be sorted by industry, region, and other criteria, can be found at www.inc.com/inc5000.

The annual Inc. 5000 event honoring all the companies on the list will be held from October 17 – 19, 2018 in San Antonio, TX. Speakers include some of the greatest entrepreneurs of this and past generations, such as Leadership Coach Marshall Goldsmith, FUBU CEO and founder and “Shark Tank” star Daymond John, Barbara Corcoran from the Corcoran Group, Hamdi Ulukaya of Chobani and Inc. Columnist Norm Brodsky.

The 2018 Inc. 5000 is ranked according to percentage revenue growth when comparing 2014 to 2017. To qualify, companies must have been founded and generating revenue by March 31, 2014. They had to be U.S.-based, privately held, for profit, and independent—not subsidiaries or divisions of other companies—as of December 31, 2017. (Since then, a number of companies on the list have gone public or been acquired.) The minimum revenue required for 2014 is $100,000; the minimum for 2017 is $2 million. As always, Inc. reserves the right to decline applicants for subjective reasons. Companies on the Inc. 500 are featured in Inc.’s September issue. They represent the top tier of the Inc. 5000, which can be found at http://www.inc.com/inc5000.

Founded in 1979 and acquired in 2005 by Mansueto Ventures, Inc. is the only major brand dedicated exclusively to owners and managers of growing private companies, with the aim to deliver real solutions for today’s innovative company builders. Winner of the National Magazine Award for General Excellence in both 2014 and 2012. Total monthly audience reach for the brand has grown significantly from 2,000,000 in 2010 to over 18,000,000 today.  For more information, visit www.inc.com.

The Inc. 5000 is a list of the fastest-growing private companies in the nation. Started in 1982, this prestigious list of the nation’s most successful private companies has become the hallmark of entrepreneurial success. The Inc. 5000 Conference & Awards Ceremony is an annual event that celebrates their remarkable achievements. The event also offers informative workshops, celebrated keynote speakers, and evening functions.